Ask anyone who has done it successfully and we’ll all enthusiastically agree: QRP DX’ing is the most challenging, exciting, and addicting kind of h.f. operation in all of ham radio. No where else is the trade-off of power for skill and knowledge more evident. The QRP DX’er is a David among Goliaths with their contest grade KW rigs and 5-element beams up 120 feet. Contest DX’ers, in general, are the cream of the crop who spare neither money nor effort in fighting their way to the top of the heap.

Where do we QRP DX’rs fit with a DSW40, an SST, a Sierra or some other rig at under one watt to 5 watts output, sometimes a yagi or quad up 75 feet, usually a low dipole or hunk of wire hung where ever possible? We should not even be in the picture!

But the simple fact is: QRP DX’ers get through pile-ups, work the rare ones, have the incredible satisfaction of hearing the DX station send “QRP STN KN” to shut up and embarrass the KW’s into oblivion! What a moment! And we sometimes just sit smiling and listen for five nights to the same 200 (???) watters calling the new rare one on 30 meters just to enjoy the pride and relief of having worked him on the first night – with 4 watts and a dipole up 45 feet!

In the early days of the “modern” QRP movement back in 1970 when Mike Czuhajewski WA8MCQ and I started up The MILLIWATT: NATIONAL JOURNAL OF QRPp, we knew nothing about the great QRP movement at the very dawn of modern vacuum tube ham radio in the 1920’s, when

the ARRL and QST editors like Robert S. Kruse (1XAQ) and L.W. Hatry (1OX) applauded the pioneering achievements of hams working increasingly longer distances with receiving type tubes hardly running hundreds of milliwatts output and in fact denigrated and ridiculed the “watt-hogs” and “ether-burners” using “5-watters” at power levels that made the cathodes glow bright orange until they vaporized (read their stories in my HISTORY OF QRP IN THE US, 1924-1960 and be amazed and inspired!). We hoped we could get enough QRO types to drop their power to under five watts, try solid-state rigs following the design leads of Doug DeMaw W1CER (ARRL QST Technical Editor) and Wes Hayward W7ZOI, and see if QRP was a viable mode. We started up an 80 meter NET (trannies with an “fT” high enough to work on 20m were hard to come by and went bye-bye very quickly!) and were astounded with QNI’s from both coasts and KP4! The big question was: will QRP cross the oceans too and and work DX? To find the answer, I started up THE MILLIWATT QRP DXCC Trophy Program in 1970 using the ARRL's own stringent rules and the requirement for bonafide QSL verification of every claimed contact with a DX entity currently on its list. Ten months later, Robert Rosier K4OCE's application and stack of QSL's showed up at the Post Office, and darned if HE didn't get MY #1 DXCC QRP Trophy! In fact, I did not get mine until #58 -- behind a long parade of other QRP DX'rs. K4OCE kept going and is now at 329 confirmed!  Now a days, there can be absolutely  no doubt that QRP DXing can be a regular mode of QRP operation with a reasonable expectation of success! 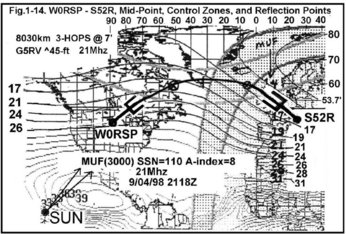 Ionospheric Propagation, Transmission Lines & Antennas for the QRP DX'r.
Sample Pages>
NOTE: Set FIREFOX to open PDF files with the Adobe Reader on your computer,  not with an add-on. FIREFOX>TOOLS>OPTIONS>ADOBE 9.n 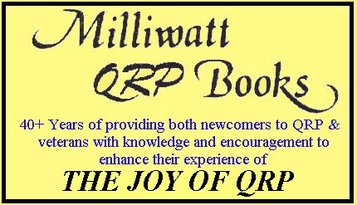 REVIEW of Ionospheric Propagation Book>
The Five-Watt QRP Movement in the US, 1968-1981.>